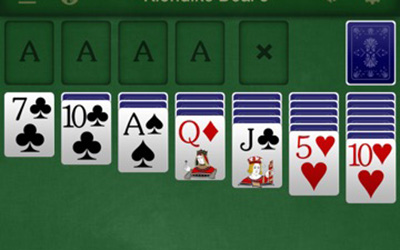 I’ve been playing a lot of Solitaire lately.  And by a lot, I mean dozens of games a day. When I was a kid, I spent every weekend and all day M-F in the summers with my grandparents.

On weekends my mom would drop me at Grandpa Ralph’s Saturday morning and I would stay with him until after Lawrence Welk, then he’d take me to Grandma Ruth’s in his old rusted out green 1966 Chevy pickup, where I’d lie on the floor and watch Love Boat and Fantasy Island. Then Sunday morning he’d come back, pick me up and drop me off for Sunday School. I’d meet Grandma Ruth and Aunt Evelyn for church. After church Grandpa Ralph would pick me up and we’d go to McDonalds and the Tacoma Mall to people watch, then he’d take me home and we’d repeat the whole routine the next weekend.

During those Saturday’s Grandpa Ralph and I would play a lot of cribbage and solitaire. I still suck at cribbage, but I feel like I’m pretty good at Solitaire. I used to think that if I was dealt a winning hand at solitaire, I would win. But not every hand IS winnable, but a number of them are. I’ve still never seen Solitaire in Vegas, but I’ve heard it’s there and I may plunk down $52 to play a hand if I ever do find it.

I said all that to say this . . . My favorite Solitaire game on the iPhone is “Solebon Solitaire“. It’s got dozens of games and keeps me entertained for hours at a time. Of course I normally only play Klondike, Deal 3. They recently introduced a feature that lets you set every hand dealt to a winning hand.

Now you may think “What’s the fun in that?” or “That’s too easy” but you’d be wrong. You may be given a choice at some point in the game to move a King over from one pile to a blank spot. But there may be two Kings you could move. Moving one makes it more likely you’ll win the game, moving the other makes it less likely, but you don’t know that until you do it. So while every hand IS technically winnable, you won’t necessarily win every hand.

Now that I’ve been playing with the knowledge that every hand IS winnable, I’ve been playing differently. Now when I get to where I think I’m done, I look for additional moves within the game, maybe moving a series of 6-5-4-3 from one 7 to another 7 to free up that second 7 to play up above. I will occasionally hit the Undo button multiple times to go back to where I had the choice to move one of two items to see if moving the other item would make more sense and get me further in the game. Right now my record is 6 games won in a row.

This got me to thinking this morning, what if you woke up every day realizing that day was 100% winnable? How would you chose to live your life that day knowing that you absolutely COULD win that day, whatever winning that day meant to you, assuming you made all the right moves? Would you do things differently? Would you have more of a swagger? More confidence? Or would you simply choose to let the cards fall where they may, assuming as in every other day, fate was your guide?

I know what I’m choosing.