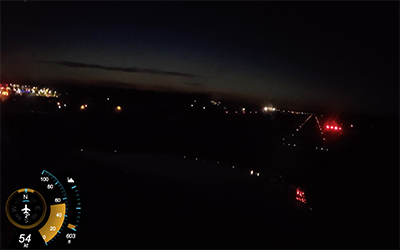 One of the things about being a pilot is maintaining your currency. To be allowed to carry passengers as a private pilot you must have made three take offs and landings in the previous 90 days, so basically if you fly once a month you’re “current”. There are no requirements about being PROFICIENT however. If those takeoffs and landings were done during the day, you are current for daytime flight. In other words you have to be back down on the ground within 1 hour of official sunset.

You may remember this post from my flight training days where I did my long cross country and had to add in a few landings at a tower controlled airport? I made it back with about 20 minutes to spare before it was officially dark. As a student pilot you are not allowed to fly at night solo. You have to wait until you’re a private pilot to do that.

If you want to carry passengers at NIGHT, you must have done three takeoffs and landings AT NIGHT and to a FULL STOP. That is, you can’t do touch and gos, you must stop, taxi back and take off again. So while I had done a couple night takeoffs and landings with my instructor prior to obtaining my license, I wasn’t current. And with all the flying I intend to do this summer, my hope was that Teri and I would fly after sunset at some point, so I wanted to make sure I was current.

Now I had done a number of night pre-flight inspections before, but always afterwards my instructor had hopped in the plane and gone along with me. Not tonight! This was going to be my first solo flight at night. I don’t mind admitting I was a little nervous. There’s not much to say about this evening other than it was thankfully uneventful. I ended up doing 4 laps in the pattern to get my currency back. Now I just need to plan to fly at night to keep my proficiency up!